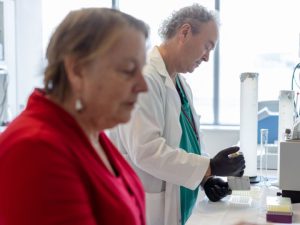 A research team led by the University of Houston has developed a vaccine targeting the dangerous synthetic opioid fentanyl that could block its ability to enter the brain, thus eliminating the drug’s “high.” The breakthrough discovery could have major implications for the nation’s opioid epidemic by becoming a relapse prevention agent for people trying to quit using opioids. While research reveals Opioid Use Disorder (OUD) is treatable, an estimated 80% of those dependent on the drug suffer a relapse.

The findings, published in the journal Pharmaceutics, could not be timelier or more in demand: Over 150 people die every day from overdoses of synthetic opioids including fentanyl, which is 50 times stronger than heroin and 100 times stronger than morphine. Consumption of about 2 milligrams of fentanyl (the size of two grains of rice) is likely to be fatal depending on a person’s size.

“We believe these findings could have a significant impact on a very serious problem plaguing society for years – opioid misuse. Our vaccine is able to generate anti-fentanyl antibodies that bind to the consumed fentanyl and prevent it from entering the brain, allowing it to be eliminated out of the body via the kidneys. Thus, the individual will not feel the euphoric effects and can ‘get back on the wagon’ to sobriety,” said the study’s lead author Colin Haile, a research associate professor of psychology at UH and the Texas Institute for Measurement, Evaluation and Statistics (TIMES), and a founding member of the UH Drug Discovery Institute.